Profile of a Typical Chinese Entrepreneur

written by Maya Cypris December 5, 2016
Share this on WhatsApp

Many a man has been born with a creative mind that has birthed innovative ideas. But without the right thick-skinned traits, the majority will find it difficult to spin their ideas into a successful business. Still, that hasn’t stopped people from trying. With the world’s many shaky economies and uncertain futures ahead, the 21st century has thus far birthed a plethora of hopeful entrepreneurs eager to take control of their own destinies. This trend can also be observed in China as the country continues its rapid progress towards becoming a global leader in modernization and innovation. However, when compared to entrepreneurs from other countries, there are some interesting differences that come to light when the average Chinese entrepreneur is put under the microscope. Ranging from background, to gender, age, skills and behavior, Chinese entrepreneurs have a clear and distinct profile of their own.

The concept of a “Chinese entrepreneur” is in and of itself a new terrain. In a country where profit-seeking behavior and private businesses are contradictions to an ideologically Communist state, entrepreneurship and innovation didn’t really exist until recently in China. China’s 20th century was plagued with numerous national traumas and wars that deflated morale, paired with an extremist regime under Mao that stunted independent thought. Perhaps the most noticeable lingering effects of this difficult era on Chinese entrepreneurship is who chooses to become an entrepreneur in the first place.

The Chinese culture is deep-rooted in close-knit family values. Hence, parents and extended family have great influence over their children and their life choices. Numerous Chinese Baby Boomers (1946-1964) and Generation X (1965-1979) members lived an extended portion of their life in great poverty and uncertainty, especially in the rural countryside where over 80% of the population resided during the tumultuous 1950s, 60s and 70s. This has in turn yielded a massive generation of parents and grandparents who have instilled in their offspring a fear of instability and have raised their children to strive for practical, secure and steady-paying jobs. As a result, an abnormally large percentage of Chinese entrepreneurs today come almost exclusively from families with a business background that are furthermore financially secure. It is estimated that 54% of Asian entrepreneurs come from families that own enterprises, a statistic that is 10 percent higher than that in the West. In China’s mainland, this percentage is even more pronounced, with 62% of entrepreneurs coming from families that already own companies. As such, many Chinese entrepreneurs can afford to engage in this high-risk career path, since the majority of them already come from a wealthy background, inheriting their family’s vital guanxi (關係- connections) and often even receiving their first major investments from their parents. This stands in stark contrast to other leading entrepreneurial nations like Israel or the United States, where entrepreneurs come from all social stratums, and often even from lower-income families where the thirst and motivation for success is higher.

Other interesting phenomena to note about the average Chinese entrepreneur include simple demographics such as gender and age. Gender-wise, China’s entrepreneurial scene appears to be more gender-balanced than Western counterparts, with a roughly 40%-60% divide in favor of men. This statistic is nearly 10% higher than that of female entrepreneurs in the West which stands at only around 30%. Considering that China is among the countries with the highest rate of women in the work force worldwide, the fact that Chinese businesswomen almost equal Chinese businessmen is not all that surprising. Still, while the gender numbers may be similar, this information is notwithstanding the many common challenges women often endure in the workforce such as corporate glass ceilings and gender discrimination.

Despite these obstacles however, China boasts the record of housing the most self-made female billionaires in the world. The Atlantic reports that an impressive 49 of the world’s 73 self-made female billionaires are Chinese (recorded in paper wealth, not cash). When compared to their U.S. equals, this data essentially means that Chinese female entrepreneurs are collectively worth about three times more than the average American female entrepreneur. Two major reasons stand behind this phenomenon—the one-child-policy (1978-2015), and the Chinese work ethic mentality. As a majority of households have only a single child, all of the family’s resources, time, hopes and aspirations are invested into the sole offspring who will go on to carry the whole family’s legacy. Hence, regardless of if the child is a boy or girl, Chinese parents will typically give their very all to ensure their one child is successful. This combined with the Chinese hard work ethic, Confucian value of filial piety, and parents’ high-expectations, means that should a boy or girl elect to go down the entrepreneurial path, they will be both physically equipped and mentally motivated to excel as best they can.

Age-wise, 44% of Chinese entrepreneurs are under 35, with the average age standing at roughly 30 in China’s mainland. These figures have been gradually decreasing over the years, and are slightly below par to the West, where the average age of entrepreneurs is 34. Although nothing too out-of-the-ordinary, the slightly younger ages of Chinese entrepreneurs is again likely due to the fact that entrepreneurship only became a possibility around the 1980s, with the implementation of Deng Xiaoping’s second round of economic reforms. Hence, generally only younger generations who have recently entered the workforce have had the opportunity to venture down this path.

Upon meeting Chinese entrepreneurs, it further becomes evident that beyond just surface-level indicators, there are particular behaviors, attitudes and actions that are characteristic to many of these budding businesspeople, regardless of the industry they come from. For one, many are serial entrepreneurs, having dabbed in numerous startup attempts in an effort to find the right successful formula. As such, Chinese entrepreneurs are typically characterized with a kind of brashness, fearlessness and fast-decision making that is far less seen in the West. Whereas in the Silicon Valley entrepreneurs tend to look before they jump in the water, it seems Chinese entrepreneurs conversely take-on the philosophy of jumping in head-first and learning to swim later. This mindset is perhaps reflective of China’s attitude as a country as it embarked on a rapid economic evolution of its own– one that occurred far faster and on a bigger scale than any in the Western world.

Similarly, Chinese entrepreneurs typically wear many different hats, and accordingly can often be found to possess a wide array of skill-sets in various fields. It is not uncommon to find a Chinese entrepreneur who has a handful of other jobs or even businesses on the side, meaning that their attention is divided amongst many simultaneous projects. This is rather different to Western entrepreneurs, who typically work in linear order– focusing all their resources in one place, and only turning to another startup if a previous one fails.

Despite this seeming scatteredness, however, entrepreneurship in China is not a route people randomly decide to embark on. As discussed earlier, Chinese people who venture into entrepreneurship typically come from a business background and are to some degree trained towards this career path by their families. This is evidenced by the fact that many of these entrepreneurs come from a very international background, having either studied abroad or otherwise extensively learned English for much of their lives. As China has lagged in the business sector for so long, parents today recognize the importance of giving their children global exposure, hoping they attain education under foreign disciplines and take the knowledge back home. Thus, Chinese people in this field often have a strong grasp of world-affairs, with an open-mindedness towards other cultures and a curiosity to explore. This creates a unique, albeit steadily growing, category of people who have received a strong foundation to help them excel internationally on the risky entrepreneurial road. Still, as education abroad is an expensive option that only affluent families can afford, many parents still prefer their children to pick a safe and secure domestic career path.

Ultimately, it is important to note that these traits are obviously not all-inclusive. There are clearly numerous exceptions of Chinese entrepreneurs who do not fit the aforementioned profile at all (ex: Jack Ma). However, these attributes seem to be the general norm. Hence, compiling all the qualities discussed above, it is safe to say that the profile of a typical Chinese entrepreneur looks something like this: 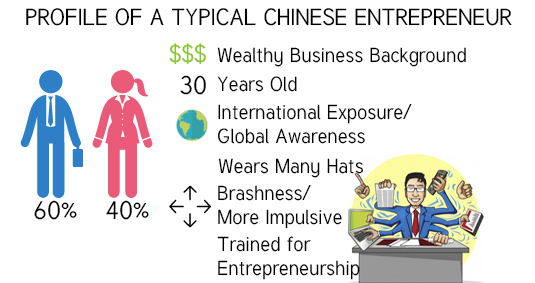 It might seem somewhat contradictory that Chinese entrepreneurs exhibit a seeming lack of focus by wearing many hats, while at the same time being very much trained towards becoming an entrepreneur. But there is logic behind the phenomenon. Although entrepreneurship in China is less of a spontaneous career path than in the West, once it’s embarked on, it is alot more open in direction and forgiving to ramifications. In contrast to the Western attitude of fine-tuning and carefulness in business, entrepreneurship in China is characterized by clear long-term goals paired with short-term leaps of faith. It is this unique dynamic, perhaps, that has allowed Chinese entrepreneurs to excel and prosper with unprecedented speed.

Interesting to read about the new Chinese entrepreneurs. They are young and focused.Fascinating to learn about the inroads made by women entrepreneurs. Perhaps some of them may be interested in the education sector in the digital age. China and Asia need to catch-up with the western world!