written by Maya Cypris April 5, 2016
Share this on WhatsApp 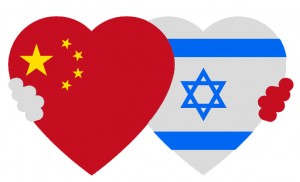 The past decade has seen both China and Israel doing exceptionally well in the business sector. Israel, the dubbed “Startup Nation”, has had its startup ecosystem bloom and flourish in recent years with an incredible 69% growth from 2014 to 2015 alone. Meanwhile, China has been busy living out the business world’s version of the “Cinderella” story, transitioning in under 30 years from an oppressed and bullied nation with high poverty rates to becoming one of the leading economic capitals of the world. Naturally, the shared success and prowess of both countries in their respective fields has caught the other’s eye, and has birthed a love story of sorts between Israeli entrepreneurs and Chinese investors who share a mutual interest for the other’s trade. Only last month, a two-day investment conference in Beijing recorded roughly 500-600 business meetings between Israeli companies and potential investors from all over China. It is clear from these statistics that China-Israel business relations are very much in the honeymoon phase of their relationship. But while the honeymoon phase is typically sweet and promising, how many of these budding partnerships have yielded success in the long run? Once reality sets in, many have found that with differing business cultures, operational styles, and given language barriers, making an Israeli business thrive in a foreign environment is not as obvious as meets the eye.

So what really happens when “Startup Nation” meets “Made in China”? With each passing year there are significantly more case studies to review, ranging from staggering success to dismal failures, and all with many lessons to be learned. One of the more publicized examples of a joint-cooperation between Chinese investors and Israeli entrepreneurs is the story of Visualead, an Israeli startup that crafted a platform for creating designer QR codes. Soon after its founding in 2012, the company turned its attention overseas to bigger markets with a penchant for barcode advertising. Success was quickly found at Beijing’s 2013 Global Mobile Internet Conference (GMIC), in which Visualead beat out leading gamers and apps from around the world to win first place at the conference’s coveted startup competition. The impressive victory meant that the young startup was soon flooded with numerous offers and propositions from various Chinese companies. But despite achieving rapid visibility in the Chinese market and being presented with a plethora of open doors, the company’s founders soon realized that the doors could close just as fast as they could open. In an interview for the Calcalist, Nevo Alva, the startup’s CEO, recalled one particularly memorable interaction with prospective Chinese investors. Following several standard meetings regarding technological build and marketing strategy, the investors unexpectedly threw Alva a curveball, presenting him with a near-replica of his product, right-down to identical graphics, and a challenge to prove why Visualead was better. Despite the meeting ending in failure, the exchange was a crash training course for the company in properly handling Chinese partnerships.

Being put on the spot with the task of demonstrating superiority is not a vicious Chinese tactic, but rather is a way for Chinese investors to ensure that they are not taking an unnecessary risk with a foreign firm if there is no need to do so. China is still a very proud and self-sustained market, and despite increased globalization and a transition to international standards, light enforcement of IP protection and copycat-culture are still common and employed if possible. Thus, many Israeli entrepreneurs have found that if their product can be easily duplicated, it will not retain the interest of Chinese investors for very long. In Visualead’s case, the unexpected meeting with investors taught the company to invest time and effort into ensuring their product was differentiable from competitors and had its own added value. Their resultant enhanced QR code technology applied complex machine learning algorithms and full image scanning that were specialized to their product and difficult to imitate. The company furthermore took the step of obtaining patents to protect their IP in China. These changes paired with the company’s already strong footing in China meant that two short years down the road in 2015, Visualead became the first Israeli company to receive an investment from Alibaba Group, the owner of China’s largest e-commerce businesses. The partnership has since proven to be going strong, with Alibaba using Visualead’s technology to combat counterfeiting of luxury goods on its shopping sites and beyond, while Visualead has meanwhile utilized the capital to develop its offline-to-online technology.

Another Israeli startup that has thrived from its ties to the Chinese market is ironSource, an online company that offers a complete ecosystem for online distribution of software and games. Like Visualead, ironSource’s journey into China kicked off on a positive note with an offer to collaborate from the Chinese search-engine giant, Baidu. Two years later in 2014, after achieving great success abroad with over 100 million user-downloads a month, the company officially headed into China and opened offices in Beijing.  With the Chinese internet sector exploding, the company’s integration into the Chinese market was timed perfectly and catered well to Chinese needs. The company was unique in that in addition to the typical mobile-based app distribution, it furthermore also offered PC-based app distribution services. For many Chinese tech-firms, this feature solved a major problem. Previously, due to the absence of global mobile services like Google Play, many of these companies were closed-off inside the Chinese market and had little access to clients abroad. The PC distribution option changed that by allowing them to tap into the world market as a PC-based application and thus develop themselves into international businesses.

Regarding their effective market strategy in China, ironSource’s co-founder & CEO, Tomer Bar-Zeev, shared in an interview that “The way we look at China and the way we think that other entrepreneurs should look at China is with great humility.” He furthermore emphasized the importance of having “a plan and a very clear roadmap” as well as “a valid business model that has been tested in China”. In ironSource’s case, its business model truly demonstrated an original and humble approach to penetrating the Chinese market. Whereas most other foreign companies sought to gain profit by exporting products into China, ironSource identified the converse need of Chinese businesses to expand outwards and provided them with the technology to do so. Today, Baidu is one of ironSource’s key clients in China, in addition to a further impressive growing roster of Chinese companies. As such, the company’s meeting with the Chinese market is prime example of a fruitful pairing for both sides.

With that being said, it is important to remember that every company’s journey in China is individual, and despite many stories of triumph, not all startups are suitable for the Chinese market. There are countless articles discussing the hardships and challenges met by many doe-eyed hopefuls who took the brave plunge into Chinese waters only to emerge defeated. Some even go so far as to warn Israeli entrepreneurs from trying. While these articles generally refrain from naming any names for obvious reasons, there really is no shame in not succeeding in China. In fact, some of the biggest and most internationally renowned businesses such as Google, eBay, Groupon, Tesco and more have found their first massive roadblock in China. The reasons for the failed partnerships are numerous, but in most all cases an overlying theme can be found—the product simply didn’t fit the market. The Chinese market can be challenging to penetrate because beyond the expected language barriers, cultural differences and governmental regulations, it has a different set of priorities and values that can be difficult for a Western entrepreneur to understand. So while the vast untapped market potential of 1 billion people sounds like an absolute goldmine, the numbers stay only numbers if the product is not truly localized and fit to Chinese standards.

Perhaps the best example of this “molding” is the immensely successful fast-food chain of KFC which has taken China by a storm. Despite appearing on virtually every block in almost all Chinese cities, any loyal consumer of the KFC brand will quickly find that the Chinese KFC, while retaining the friendly logo and general branding, holds an entirely different menu and atmosphere that is fully designed to the Chinese taste. Applying this to Israeli start-ups, not all of Israel’s innovation in its current form is necessarily relevant in China. For example, Israeli start-ups that are community-based or rely on crowdsourcing have often struggled in the Chinese market. The most common issues with these types of startups range from the platforms not being tailored to Chinese tastes, the entrepreneurs lacking the necessary access to Chinese users, and even the simple fact that a foreign platform is not as trusted as a Chinese one. Meanwhile, high-tech start-ups dealing with fields like e-commerce, green-tech and IoT (Internet of Things), have typically fared well in China. This is because they address and provide innovative solutions to current Chinese needs such as digital payment platforms, environmental management and mobile functionality. Indeed, the latest Global Mobile Internet Conference saw the Israeli start-ups Feelter— which developed an analytical tool for producing e-commerce social scores, and FieldIn Tech— which created an IoT pesticide solution, take home the top prizes of Chinese investments worth 50,000$ and 20,000$ respectively.

To conclude, the love-affair between Chinese investors and Israeli entrepreneurs is clearly not just another empty trend that will soon fade away. Though some partnerships have failed, these are the bumps and bruises along the road that can and should be learned from. All-in-all, the increased cooperation and many success stories between China and Israel have grown and strengthened because as in all good relationships, both countries help the other be its best.

Most inventors can not go to China to show their inventions are there reps. in USA that help bridge the gap with China??

Are there reps. in the US that can help with China most small inventors can not attend events in China seems most products are made in China for companies in the US.