written by Julien Legrand June 2, 2017
Share this on WhatsApp 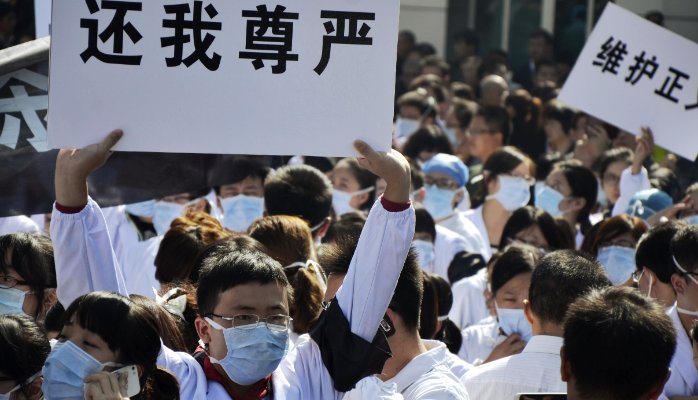 The Chinese healthcare system is facing huge challenges with, on one hand, a greying population, multiplying chronic diseases and poor health literacy and, on the other hand, too few qualified doctors working in overcrowded top tier hospitals while lower tier ones are deserted. eHealth solutions are today multiplying to address the very obvious needs for higher quality of care and the associated market was recently estimated to reach USD 110 million in 2020 by BCG.

After exploring how patients’ experience was improved through digitalisation, and how BATX (Baidu, Alibaba, Tencent and Xiaomi) were entering the market, after analysing Chinese doctors’ main problems and investigating the reasons why China’s eHealth startup WeDoctor had turned into a unicorn, I conclude this 5 articles series with a global overview of the reasons why the Chinese healthcare ecosystem indeed needs to evolve, how digital can help in the process and the ways in which the Chinese government is already integrating it within its own reform plans.

The current patients’ experience is incredibly bad: appointments are still not the normal way to consult a doctor, hospitals requiring incoming patients to take a number and wait, sometimes for more than 24 hours, to get the chance to see someone. Indeed, top tier hospitals are overcrowded, as no Chinese actually trust lower tier hospitals and their doctors. Chinese from villages, townships or lower-tier cities will typically prefer to travel for a day to get the chance to consult a doctor from a reputable hospital rather than go to the local one, the latter being considered unsafe or unreliable with doctors whose knowledge is likely to be very limited. Overcrowded hospitals mean that doctors have very little time to allocate to the patients they receive, with a doctor typically spending between 3 and 5 minutes per consultation. Given that the Chinese population is still largely ignorant of health matters, one can easily understand that such a situation creates frustration as patients realize how much efforts and money they have gathered together to get a diagnostic that no one understands except the doctor himself. Furthermore, pre-90s generations have all experienced a free healthcare system and therefore now struggle to understand the benefits of an increasingly expensive one, where outputs still do not seem to match inputs. The situation leads to extremely tensed relationships between patients and doctors, the incomprehension leading to explosive situations in which it is not uncommon for patients to insult or, in the worst cases, assault their doctor for failing to provide the right treatment. Doctors themselves are increasingly frustrated by the lack of recognition of their status, as the Chinese society does not hide its preference for studies in finance or business, partly because doctors’ salary is extremely low, especially in public hospitals (where the working conditions are the worst). China is therefore undergoing a nationwide vocational crisis, with medical schools attracting less and less students. Last but not least, transferring from a hospital to another is a nightmare, as there is no standard to facilitate data transfers between hospitals and sometimes even between their own services.

Challenges are therefore numerous and the need for solution is even more pressing that the Chinese population is getting older and older and more and more likely to get sick. Digitalisation of the healthcare system is promising in the sense that it addresses most of those problems, if not in their entirety at least partially. It provides solutions to organise appointments, optimize queue management and alleviate the red tape, using internet or mobile app platforms. It empowers patients by providing them access to online consultation services on one side and, on the other, empowers doctors by helping them contact colleagues with better qualification or deeper knowledge on a specific field of expertise. It provides doctors with productivity tools, improving the use of their limited time. It eases health education of Chinese population, through the development of patients and doctors’ communities (forums, social networks), as well as provides patients with ways of sharing about their care experience with a given doctor or hospital, helping other patients to make better choice on how they will spend their money in healthcare services while providing doctors and hospitals with a better understanding of the pain points of their patients. As for data sharing practices, the digital industry has already developed similar infrastructure for other situations and is now ready to provide them to hospitals and doctors so as to better manage patients’ health data. 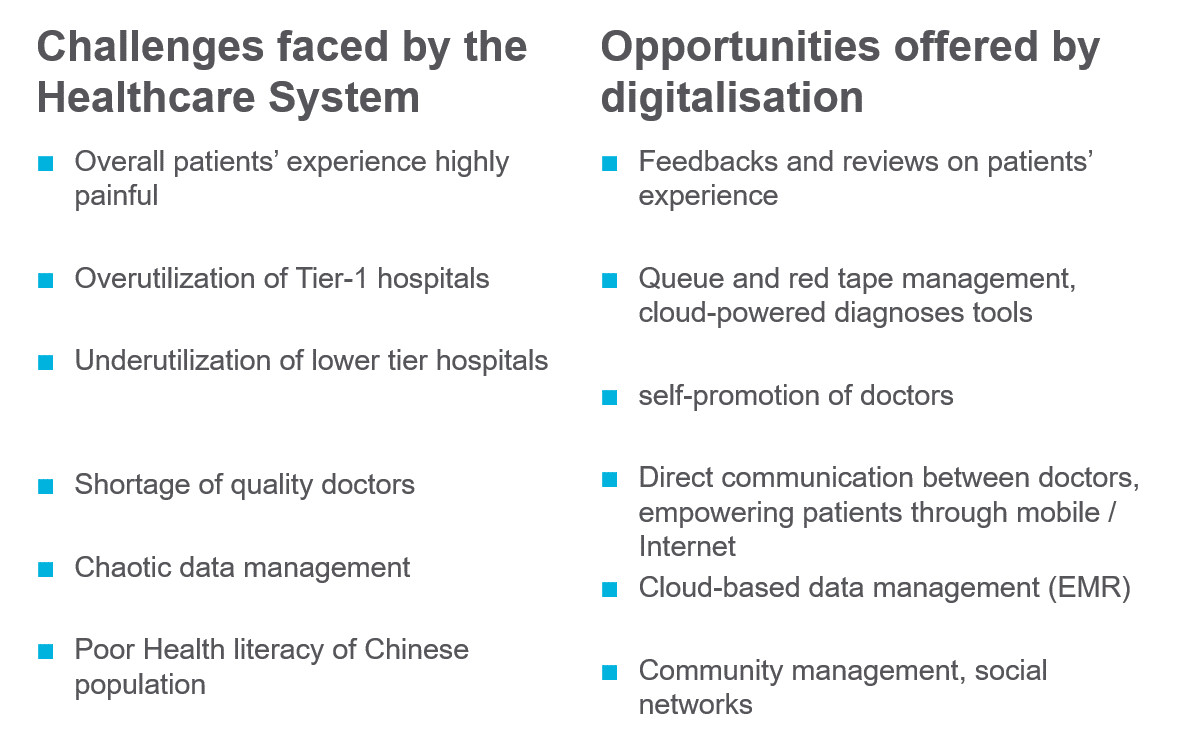 Because it holds so many promises, the Chinese government has recently unveiled various initiatives targeting at leveraging the potential of healthcare digitalisation. The 13th Five Year Plan aims, among many other things, at developing a ubiquitous and fast mobile network covering all China, so that mobile-based solutions can penetrate even its most remote locations. The Chinese government also plans to promote mass entrepreneurship, especially through further development of its investment regulations, aiming at encouraging the emergence of fintechs, especially important to simplify healthcare-related payments and reimbursements. It aims at shifting hospitals’ business models from for-profit to non-profit, further develop eHealth solutions, implement new patient-doctor dispute solutions mechanisms, provide private actors with an access to similar status as public ones, increase the efforts put in prevention, as seen as one of the most cost-effective way to reduce disease-related costs, and aim at reducing chronic diseases treatment costs and death rates.

Within these initiatives to leverage digitalization to reform the healthcare system, Premier Li Keqiang has announced his “Internet Plus” plan, aiming at promoting the digitalisation of several target industries: manufacturing, finance, healthcare, etc… In healthcare, the government is pushing for further data sharing between various stakeholders of the healthcare industry, objective that should be eased by the creation of a public Medical Information Platform along with the further development of Electronic Medical Records. The initiative explicitly claims to support mobile-based services. It sees in the development of internet and mobile solutions an opportunity to empower patients residing in lower tier cities and rural areas, especially through the opportunities open by remote consultation. In coherence with the 13th Five Year Plan objectives of increasing prevention efforts, the government explicitly supports “smart” health services encouraging the adoption of healthier lifestyles.

Given the promises of healthcare digitalisation and the government support, consultancy firm BCG is expecting the digital health market value to reach USD 110 billion by 2020, in a total healthcare market expected to reach USD 1 trillion. No wonder then that so many actors are appearing in China, competing fiercely for a share of this immense cake. As analysed in my market micro-analysis, start-ups are popping everywhere in the country to simplify patients’ life and solve doctors’ main problems, with best performers turning into unicorns. Baidu, Alibaba, Tencent and Xiaomi, the Chinese version of the American GAFA (Google, Apple, Facebook, Amazon), are also pouring money into the market, both to benefit from the promises of the market and to integrate it within their greater big data strategy.

Julien Legrand received his master degrees from Mines ParisTech, PSL Research University and Peking University’s Yenching Academy. He wrote his first master thesis on innovation strategy for tech companies and his second one on Chinese innovation ecosystems. He worked as a strategy analyst for Orange and Air Liquide before joining The Boston Consulting Group in 2017. He writes on tech start-ups innovation and digitization of multinational companies.